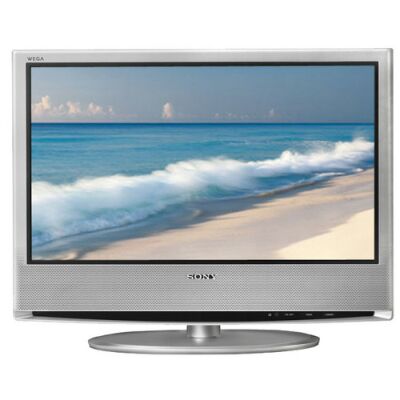 HD flat panel TV.
While conventional CRT televisions are boxy and heavy, today’s flat panel LCD TVs can literally hang on a wall. And Sony’s BRAVIA LCD TVs are masterpieces of technology that look really good on a wall.

Viewing distance.
Viewing distances are not the same for high definition and standard definition. In the store, try to compare sets at the distance you will view from at home to find the right screen size for you. Ideally, the center of your TV screen should be at eye level. For the typical person in a typical couch, this is about 45 inches (114 cm) off the floor. That’s why it’s smart to buy the TV manufacturer’s stand, which usually positions the screen center at about this height.

Progressive, interlaced and scaling.
Progressive scanning (720p and 1080p) transmits all the horizontal scanning lines at the same time. Interlace scanning (1080i) transmits each picture as two fields, each of which includes alternating horizontal scanning lines. 1080p is considered the “holy grail” of HD. To accommodate 1080, 720 and 480-line sources, modern televisions routinely use “scalers.” These circuits convert all inputs to progressive at the screen’s native pixel count.

3LCD
Featured in Sony Grand WEGA™ 3LCD television, Sony’s 3LCD chips deliver extremely accurate color reproduction, gorgeous gradation of deep blacks, and high resolution at surprisingly affordable prices. Some DLP viewers may notice color break up and not see color all the time. 3LCD delivers color to the screen at the same time without artifacts for natural color realism. The result is a bright, detailed and vivid picture.

BRAVIA LCD technology.
There are many LCD televisions out there. But few with 7th-generation manufacturing. Few with an exceptional 178° viewing angle. And few with a Wide Color Gamut backlight, specially formulated color filters and color processors, forming Sony’s Live Color Creation. These innovations set BRAVIA LCD televisions apart from the crowd, making BRAVIA the choice for outstanding picture performance.

Color Stability
Most DLP televisions use a single display chip and a rotating color wheel to flash individual colors up on the screen, one at a time! This flashing may be noticeable to some viewers as something called “rainbow effect” or color breakup. Sony projection televisions use three individual LCD chips to produce images, so there are no problems with color breakup.