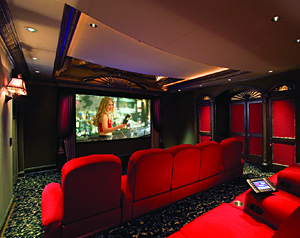 Installing a home theater next to a master bedroom can be a recipe for waking nightmares. Preventing those bad dreams in this southern California retrofit was the first priority for electronics installation firm Audio Images.

The theater’s scalloped ceiling serves as part sound absorber, part diffuser, and Grimani prescribed acoustical treatments for the walls, including absorbers, diffusers and bass traps. All acoustical materials are hidden behind stretched fabric on the walls and ceiling. Add a little noise control for the adjacent furnace, air ducts and projector fans, and all’s quiet in the bedroom—even when the theater is cranked.

The stunning woodwork in the theater is the most impressive feature of the space, according to Audio Images president Mark Ontiveros. Because workers were unable to alter the framing of the room, installers elected to mount the projector in the master bedroom closet. Utilizing a closet shelf is a fairly standard solution for a projector installation, but Ontiveros hit a snag when he proposed renting out permanent shelf space for the Runco piece. “The wife didn’t want to give up any closet space for the projector, so we had to mount it into a soffitt and install a fan to keep it cool.”

When it’s not a theater, this 10 seater is a karaoke joint. Audio Images wired the karaoke music server into the sound system and included multiple microphones.

Whether it’s a theater or karaoke house, it’s a great place for entertaining.