Geoffrey Morrison over at Home Theater Magazine has written a great article about home theater lies and It can stand by itself. I would like to add a few comments on how I feel about the article and each of the comments that he makes.

No matter what type of display you’re looking for, you’re no doubt going to be comparing the specs and feature lists of each. Things like contrast ratio, lumens, 3:2 pull down, and others are a marketing departments favorite tools to make their product sound better than another. Take many of these with a grain of salt. Take others as an undersold but vital aspect of a product. To sort though them, here’s what they all mean.

Lumens
The number of lumens is the measurement of the brightness of the projector overall. In general you will want a projector with a higher number of lumens as you will want a brighter picture. The only way to compare lumens is to look at the projectors of one company and if you are looking at a projector from another company make sure you know what the relation is between the two comapnies as far as the lumen level is concerned.

Anything called “Edge Enhancement”
Edge enhancement is a sharpness level that apparently will make edges of things on the screen sharper and not so soft. There is usually a very bad payour in that the picture dow not look nearly as smooth and you have jagged lines all over so I believe, as most other pros I think that this is a very bad feature to enable on your TV.

Anything to do with speakers
Speakers come from companies that always lie. Not that speaker companies are bad, but if your competitor is measuring a crazy amount of wattage for speakers then you really need to do the same. My home reciever puts out 70 watts per chann el which is fine but how many car stereos have a wattage of 500-1000 watts per speaker? The numbers tend to be a bit more fair in the home theater industry but I still find that the best way to compare speakers is to go out and compare the same DVD or CD with different speakers connected to the same amplifier, this is by far the very best way to compare home theater speakers.

Comb Filter
A comb filter is the way that a TV will interpret the sgnal coming through composite cables. More than likely you are using Component video (best) or s-video (second best) to connect your DVD player to your TV which mean that the fancy comb filter, good or bad just is not being used.

1080p vs 720p
Geoffrey says do not worry about 1080p as you can not see the difference between that and 720p and he is probably right today. In five years time we will probably care more about 1080p but right now even the video games are really only being created for 720p because it just takes too much to program for 1080p. Look at what you want and what your budget is and remember the quality that you get for 720p is the most important standard to worry about. 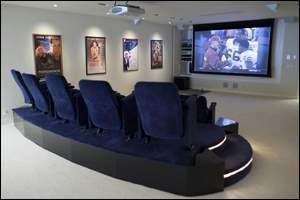 The next time you shop for a new television, odds are good you’ll buy a home-theater system as well.

The two often go hand in hand. Many people who come in for a TV take the additional step of adding a surround-sound system and other components, said Quintin Hammonds, assistant manager at Jerry’s Audio-Video in Phoenix.

The percentage of households with home theaters is rising. More than one-third — 36 percent — of American households now have home-theater systems, the Consumer Electronics Association reports. In January 2003, only 28 percent did. What’s behind the increase? Desire for the latest technology is one reason.

An entry-level system, a home theater in a box that provides surround sound for your existing television, can cost as little as $199. Typically used in dorm rooms, condos or bedrooms, these units lack the functionality of more expensive systems, he said.

For $3,500 to $6,000, you can get a flat-screen television, components including speakers, receiver and DVD player, and a remote control that will operate everything. Of course, you can spend even more to get a top-of-the-line system complete with pull-down screen, overhead projection system, theater seats with cup holders and special lighting.

END_OF_DOCUMENT_TOKEN_TO_BE_REPLACED

I found the following online newspaper article that should help you out in your home theater thinking from a newspaper in Buffalo. These tips are pretty basic but they are very important to know and remember when shopping for your home theater.

Don’t put your finger in that electrical socket!

Oh, wait, you already knew that. But here are a few other things you might not know about how not to treat your home-entertainment equipment:

• Do not plug your TV into the same circuit as your air conditioner, whether it’s sharing a power strip or plugged into different wall outlets on one side of a room. (It’s no coincidence that the TV picture dims every time the AC kicks into super-cool mode.)

• Do not use the inferior composite or S-Video connections with your HDTV. (Use component video or HDMI.)

• Do not panic if your CD skips. Most likely, it’s just dirty. Clean with a lint-free cloth, wiping from the center to the edge – not in a circular motion. Some people use dish detergent or Windex, but a cloth and, if needed, a little water will work. If the disc still skips, it might have a scratch or gouge. Repair it with a Digital Innovations SkipDR Repair Kit www.digitalinnovations.com, about $30). If all your CDs skip, it could be that your player’s lens is dirty. Buy a CD cleaner with a brush attachment at your local electronics store.

END_OF_DOCUMENT_TOKEN_TO_BE_REPLACED

A new upgrade for home theater enthusiasts provides as many as eight listeners with the same surround-sound experience.

The new system is one of the first to apply “fuzzy logic” to audio, assigning rules to sound wave data and providing a processor with instructions so that it can prioritize information.

Home theaters have always had a tricky quirk: in an average-sized room, the best sound would go to the listener in the middle, and everyone else had to settle for special effects that could sound far away or out of place.

Now, following years of research into how humans perceive sound, audio engineers have infused a home-theater receiver with software that automatically detects room acoustics, speaker placement, and other information at eight unique locations and then processes the sound to give each listener the “sweet spot.”

Called MultEQ and developed by Chris Kyriakakis and his colleagues at Audyssey Laboratories, Inc., the technology is a product of research into “immersive audio” by Kyriakakis and others at the Integrated Media Systems Center (IMSC) at the University of Southern California, one of the National Science Foundation’s Engineering Research Centers.

The new technology arises from findings in audio signal processing, acoustics, and psychoacoustics and is based on the NSF-supported doctoral research of Kyriakakis’s one-time student, Sunil Bharitkar, and former IMSC Masters student Philip Hilmes. All three researchers are co-founders of Audyssey Labs and co-principal investigators on the research publications.

END_OF_DOCUMENT_TOKEN_TO_BE_REPLACED

Did you know that a good quality home theater system can now be had for well under a thousand dollars? If we already have a large enough television, it will cost even less!You may have to make your popcorn in the microwave, get your cold drink out of the fridge and settle for your favorite recliner chair instead of an uncomfortable cinema seat. You won’t have to put up with the chatting or cell phones of you fellow theater goers, but you can have all the fun and excitement of the home theater experience even if you are not yet one of the income earners.

Now, consider the time you spend going to and returning from the movie and how much you value it. Take that number and multiply it by the number of movies you usually like to see in a year. That is a pretty startling amount isn’t it! The one time purchase of a home theater system will eliminate most of those expenses. It may also require that you to buy a better quality television or stereo equipment than what you currently have. These better quality products will last longer; not requiring expensive replacement soon will be another area of savings.

A lot of us view a home theater system as being something for only the people with lots of money. We see the fun times at the theater, with tiered seating, plush chairs, curtains over the screen and popcorn, hot dogs and drinks in the lobby. It’s true that only those with plenty of cash (and space) can build their own version of the downtown theater in their home, but that doesn’t mean the rest of us have to suffer with a either going downtown to the theater or making do with the little television in the corner.